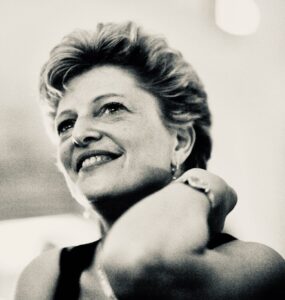 When Carey Perloff was a little girl in Washington, D.C., she wasn’t dreaming of a life in the theater. She was, instead, trekking once a week to the Smithsonian with her father—an armchair archaeologist. The pair of them looked at the dioramas and wondered about ancient mysteries.

By the time she’d become an undergraduate at Stanford, that dream had taken further shape. She was studying Latin and Greek–and the history of the civilizations which had spawned those languages–from afar. Perloff was already getting her hands dirty on archaeological digs in the American Southwest.

Then came a Fulbright to Oxford, to further her classical education as a graduate student. Here, however, things began to take an unexpected turn: she began directing plays.

Her mother claims to have seen this coming. Marjorie Perloff, professor emerita of English at Stanford, would say in an interview about Carey:

“She hated Barbies but always loved her Madame Alexander dolls. She would set them up in her room and make them furniture out of paper, or umbrella stands out of Tampax holders. The ‘Madames’ had newspapers, schoolbooks and notebooks, and I would hear Carey in her room, playing by the hour, and saying in a low voice, ‘Now, Hanse, what’s the answer to this question?’ Or she’d have them recite things, and then she’d correct them—‘No, no, walk left to right.’”

For two summers during her Fulbright years, Carey directed plays at the Edinburgh Festival. In her production there of Vladimir Mayakovsky’s The Bed Bug, she ended up casting her future husband, Anthony Giles, a British scholar of the Soviet Union.

“Ant’ny,” as she calls him (always with a grin), followed her to New York, where she first landed a job at a secretary of the International Theater Institute, before moving on to become Joseph Papp’s casting assistant at the Public Theater. In 1986 she turned 27, and was tapped to become the artistic director of the Classic Stage Company (CSC)—an off-Broadway theater known for its revivals and adaptations.

In a Stanford alumni magazine interview, Carey credited her mother with her own lifelong interest in literature. Professor Perloff is renowned for her expertise in the lives and work of modernist poets: William Carlos Williams, Sylvia Plath, Ezra Pound.

“Huge amounts of literature were devoured in our house,” Perloff says. “And my amazing mother is much more avant-garde than me—she thinks I’m very straight-ahead. She’s always saying, ‘It’s time to branch out, Carey. Time to do Thomas Berenhard.’ And I say, ‘Yes, and you and I and three other people would come.’”

It was at CSC that her ear for exquisite writing began to pay off. She would later say, “I want language that’s like the pebble in the water, that ripples and ripples and ripples long after it’s heard. You know when you’ve heard great theatrical writing—and it’s not West Wing.”

The New York Times described her debut production there as follows, saying that Carey:

[D]usted off a translation of “Electra” by Ezra Pound that no other producer had ever bothered with.

“I thought it was the closest to Sophocles I’d ever read,” Ms. Perloff asserts. “Sophocles is very tight, chiseled, precise Greek. It isn’t purple prose; it’s not full of thee’s and thou’s.”

Instead of saying, “Behold thou this our father’s signet ring, and see if I speak true,” as in the standard Victorian Loeb Classics version, Pound’s translation reads, “Here’s dad’s ring,” which in Miss Perloff’s opinion is much closer to the original Greek, which is four words and very direct.

She knew that she wanted to produce the classic plays of Harold Pinter, but it was a hard slog convincing him to allow a New York revival of his work, off-Broadway. It took six months of letters and phone calls to convince Mr. Pinter that she deserved a go at it. At that point, he hadn’t allowed anyone in New York to produce it for 20 years.

“Americans tend to do dramaturgy that’s confessional,” Carey would later recall. “If you tell the truth, you absolve yourself. But the British don’t tend to tell people what they think. For them, language is a smokescreen.”

It was 1988, and once Carey got the go-ahead, she knew that she wanted Peter to play the seductively sinister Goldberg. Though she offered him the part, he wanted to read for her, and that’s when the two first met.

The production was billed as a 30th Anniversary performance, and though Pinter was in New York City at the time, he was at first hesitant to attend himself. The New York Times reported:
Last Spring Harold Pinter sent Lauren Bacall down to Manhattan’s East 13th Street to take a look at CSC Repertory’s production of his play “The Birthday Party.” Her report so intrigued the playwright that when visiting New York in November he arranged to see the small, 180-seat theater and meet CSC’s 29-year-old artistic director, Carey Perloff.
Pinter was impressed enough, in fact, that he asked Carey to take on the first American production of his newest play, “Mountain Language,” the following season. Their work together would continue for the next 20 years. 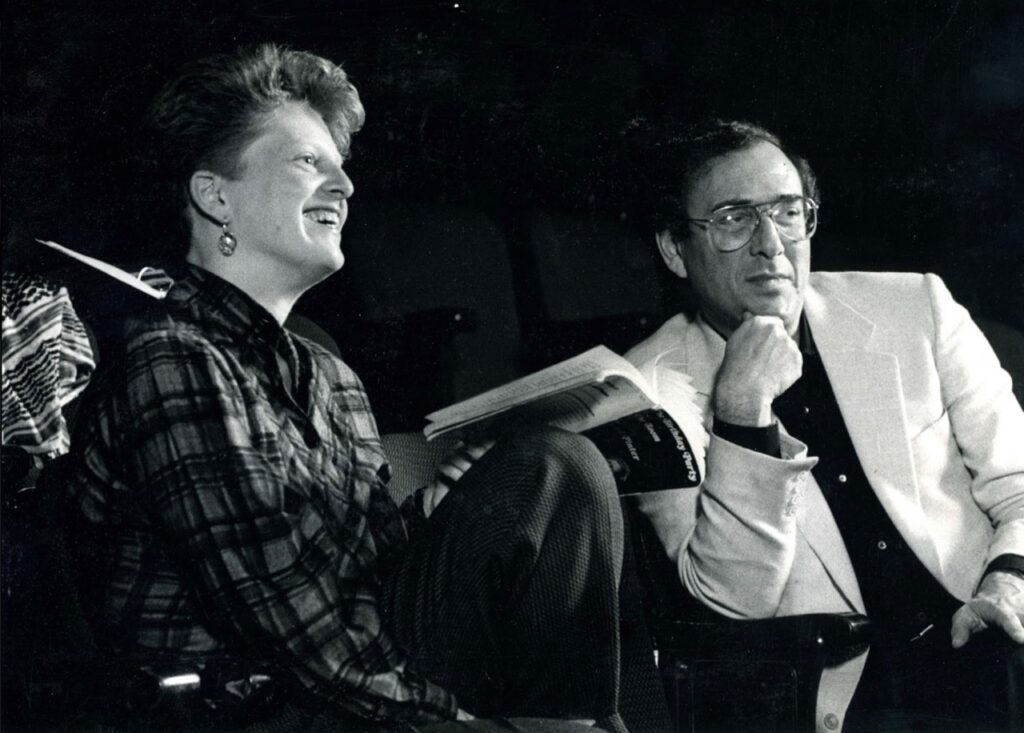 The 1989 Loma Prieta earthquake, which devastated San Francisco, would have an unlikely but positive impact on Carey’s already blossoming career. That temblor destroyed the renowned Geary Theater, a 1,000 seat classical venue which had become the home of ACT, the American Conservatory Theater. 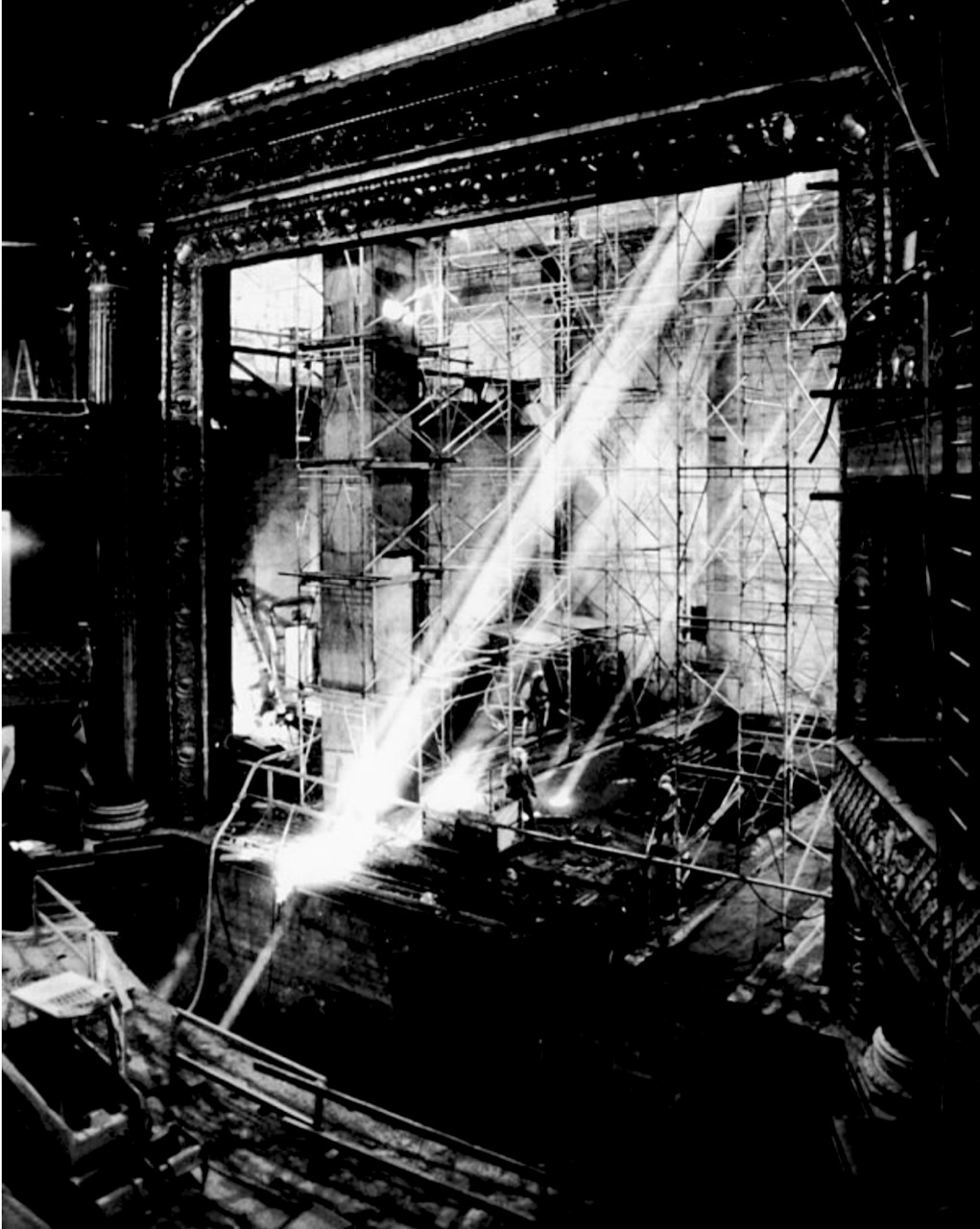 In 1992, its board asked Carey to come aboard as artistic director. Her first take, upon stepping into the scene of destruction, harkened back to her archaeological roots. “It was a ruin—and it felt so familiar,” she said. “I just wanted to get in there and excavate.”
At the same time, she observed, “For those of us who work in dark rehearsal studios, it was very weird to see natural light coming into a theater. A big hole had opened in the roof, and the ceiling had peeled off like an orange.”
Today, the Geary looks like this: 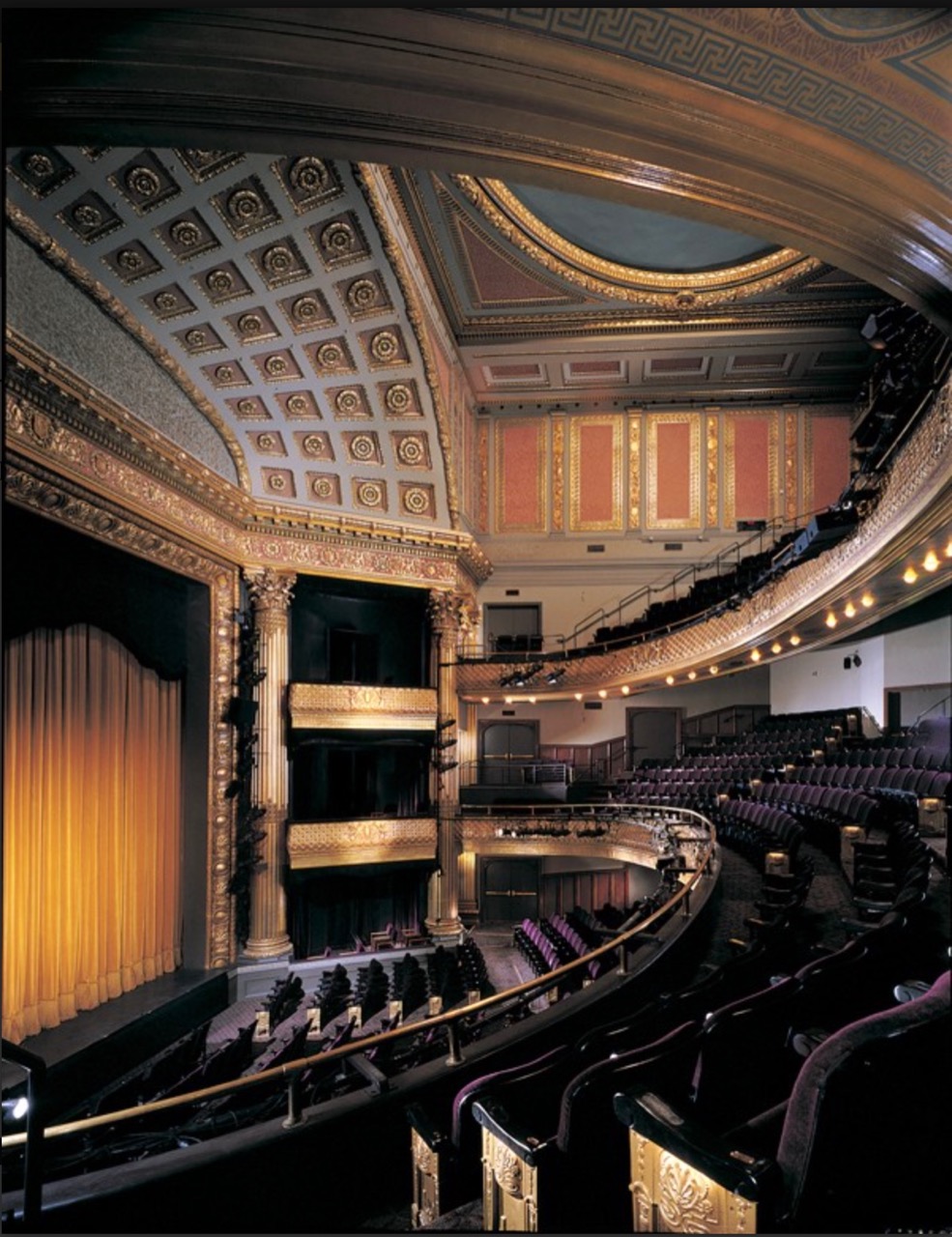 Carey’s superb productions there have included the American premieres of Tom Stoppard’s Indian Ink and Invention of Love, and Euripides’ Hecuba, starring Olympia Dukakis. She produced, as well, the first staging of Angels in America outside New York (directed by Mark Wing-Davies). 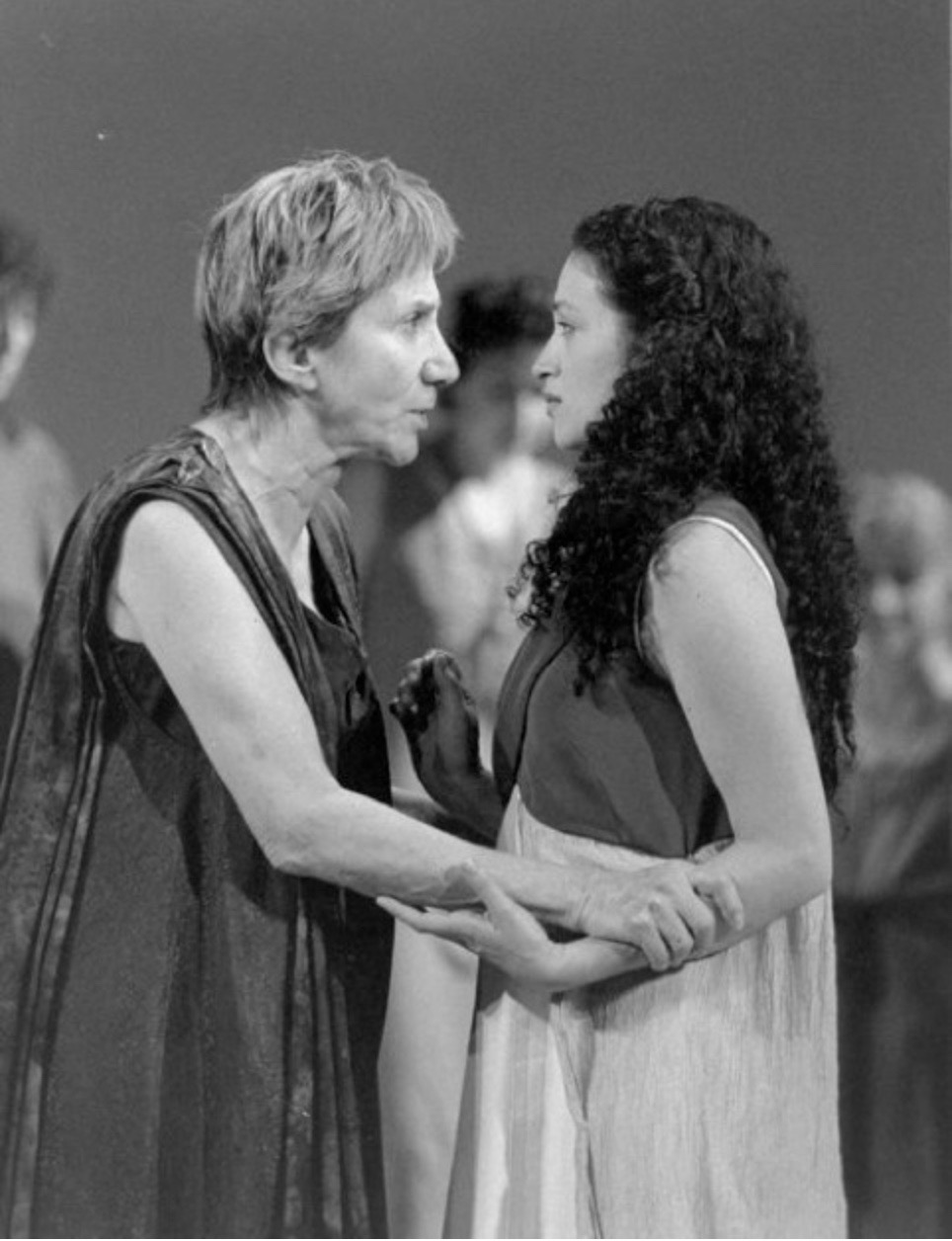 And, in 2001, Carey embarked upon a joint production of two one-act Pinter plays, “The Room” and “Celebration,” in which Peter also appeared. The opening night? September 12th. Just over 24 hours after the Twin Towers fell in New York.
In an interview at the time, she observed that:
“[This is] a very odd time to be making theater.” The night after the terrorist attacks, 800 ticket holders turned out at the Geary for a Harold Pinter twin bill, Celebration and The Room. What’s more, 500 stayed to talk with the actors after the house lights went up.

“I asked everyone to take a moment and look down the row and see the other people who were there, who wanted to have a place where they could gather and connect,” Perloff recalls. “We have tended to think of ourselves as so fiercely individualistic, and now suddenly we are rethinking our role as participants in American culture.” 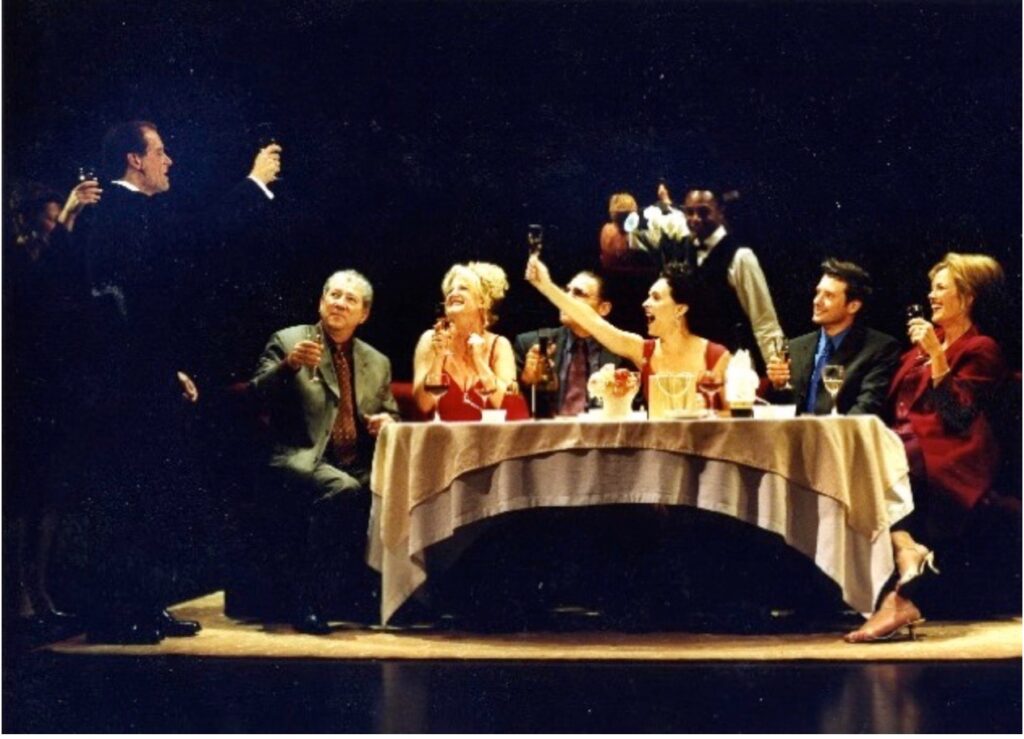 As hard as she has fought on behalf of both stellar writing and the power of the spoken word, Carey is also a champion of her performers. “Actors, to me,” she has said, “are the most magical people in our profession. They’re complete chameleons and can imagine their way into worlds that we’ve never encountered.”s. 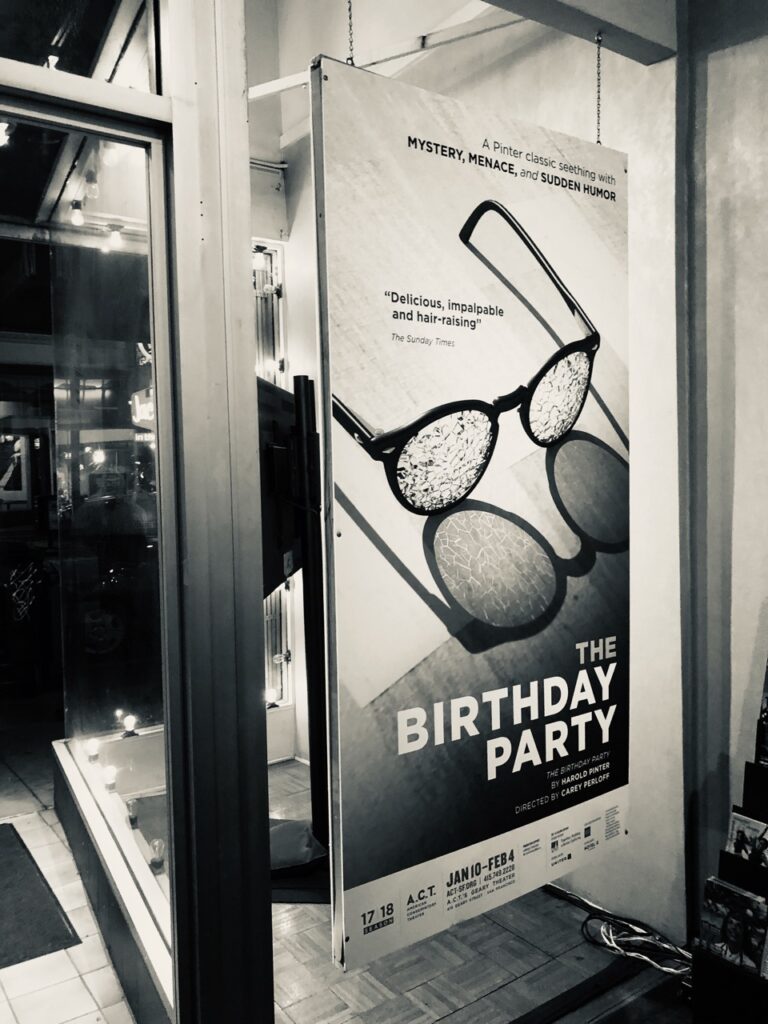 For her last production as artistic director of ACT, Carey put on Pinter’s The Birthday Party in January of 2018. Peter was a very happy member of the audience for that splendid rendition—and he and Carey had a wonderful time catching up with the cast after the final curtain. 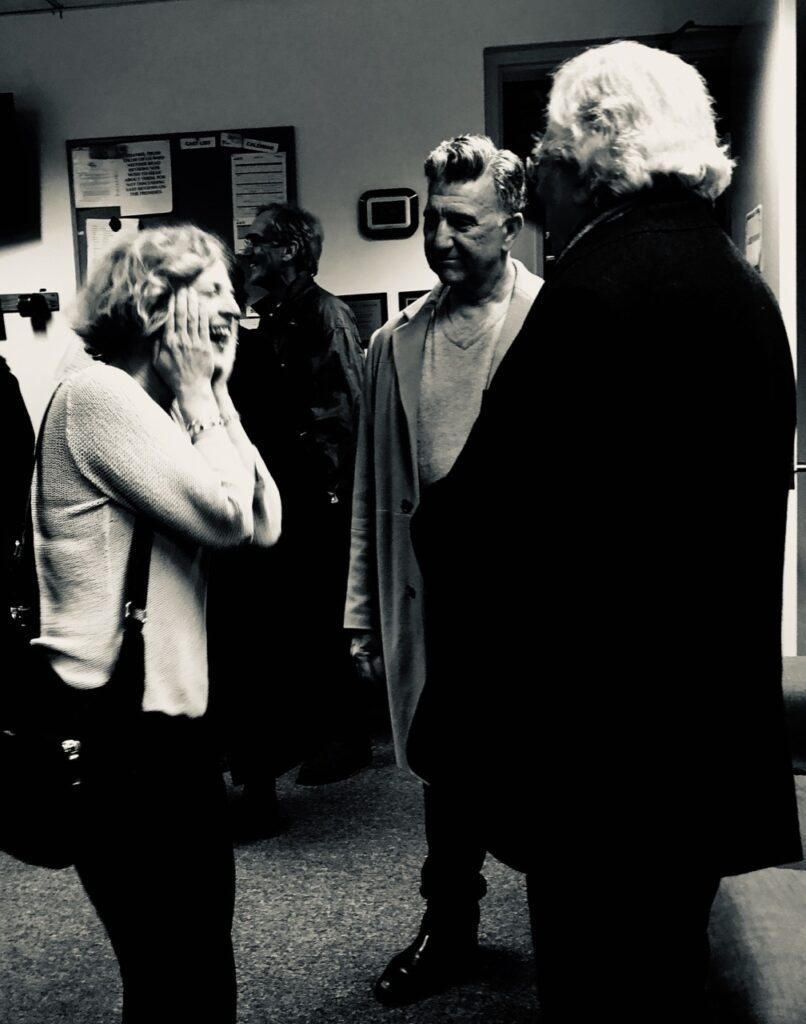 Carey is the author of Beautiful Chaos: A Life in the Theater (City Lights Foundation Books, 2015) 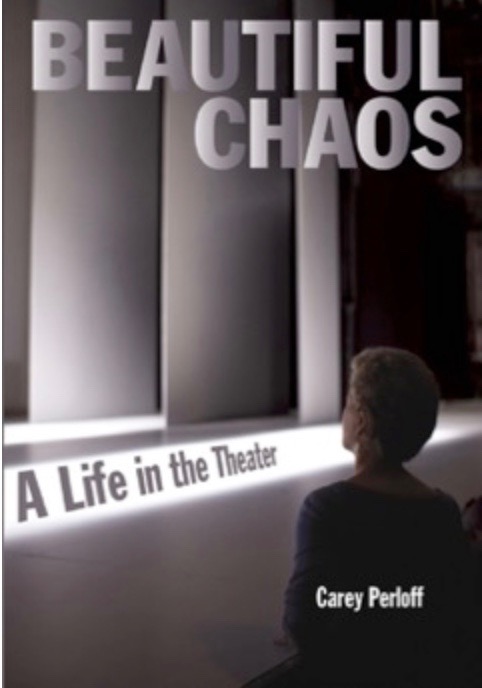 Beautiful Chaos: A Life in the Theater

Her forthcoming book, In the Room: Harold Pinter and Tom Stoppard in Rehearsal will be published by Bloomsbury Methuen Press in January, 2022.

Carey is an award-winning playwright. Her works include Bastiano or The Art of Rivalry, Edgardo, Kinship, The Fit, Higher, Waiting for the Flood, Luminescence Dating, and The Colossus of Rhodes.

She and her husband Anthony Giles have two children, Alexandra and Nicholas (aka Wingtip).

You can read more astonishing, wonderful stories about Carey’s life and work at her website: http://careyperloff.com/index.html