Matthew Goodman’s splendid fourth book, The City Game, is the focus of this episode of Vocal Heroes.

The 1949-1950 City College of New York (CCNY) basketball team remains the only college lineup ever to win both the NIIT and NCAA championships in the same season, but several players were caught up in a point-shaving scandal that haunts their triumph to this day. 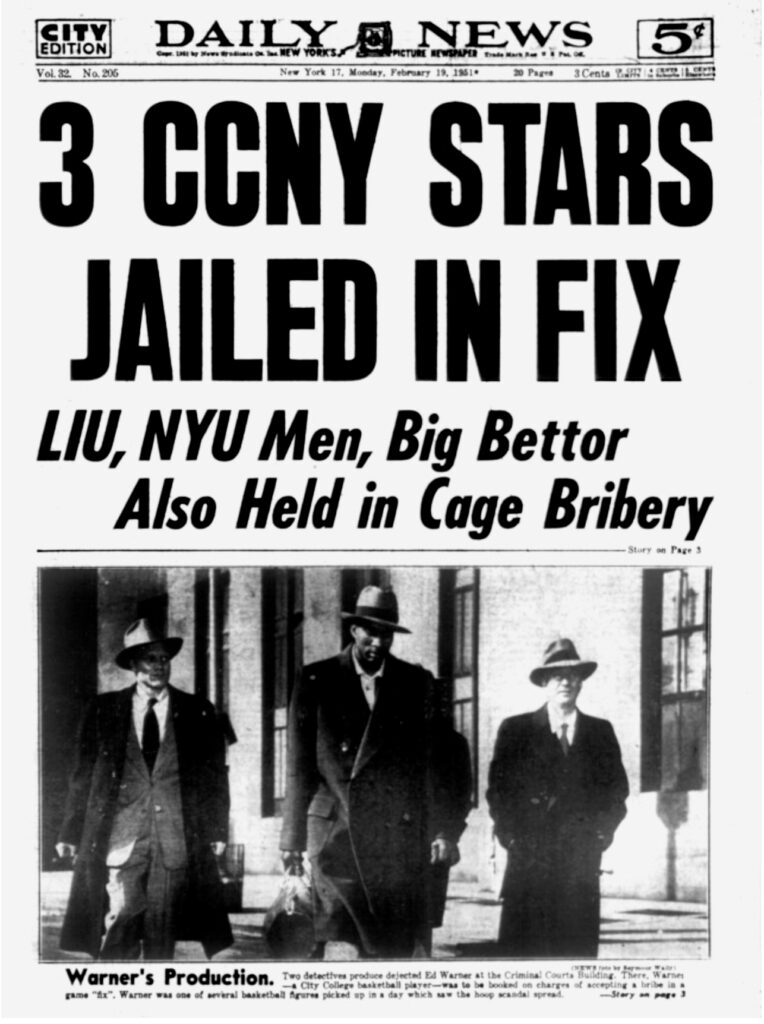 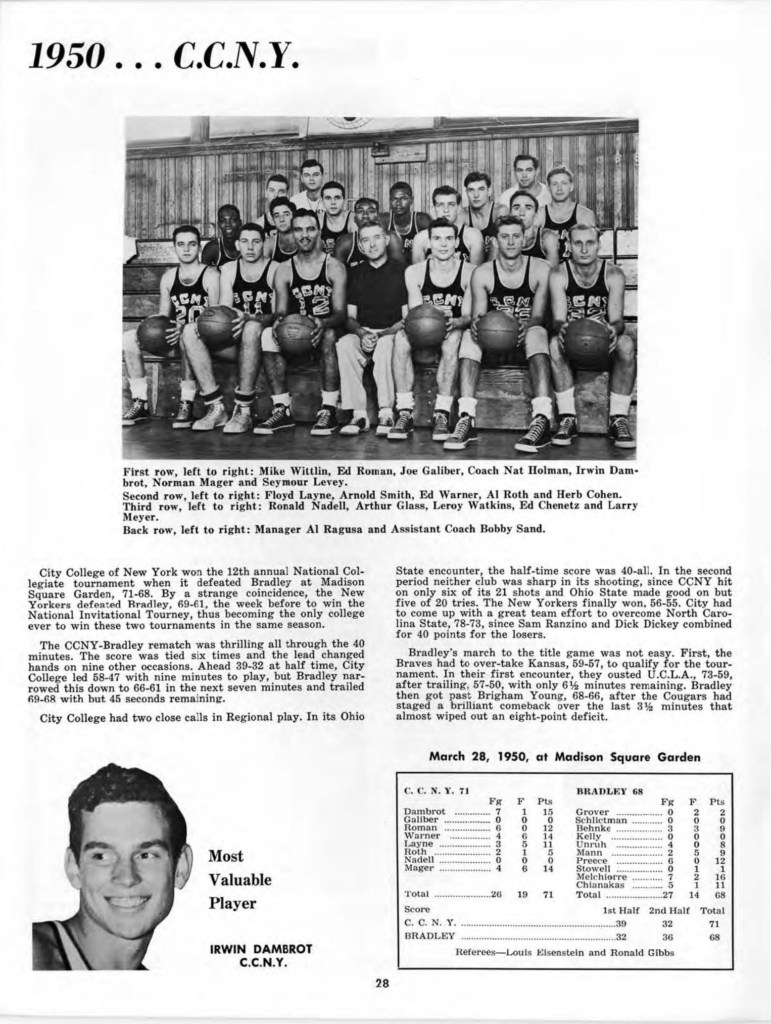 Coach Nat Holman’s team prevailed over the all-white Kentucky Wildcats, whose players refused to shake hands with the CCNY squad at Madison Square Garden–to the disgust of the 18,000 members of the audience. 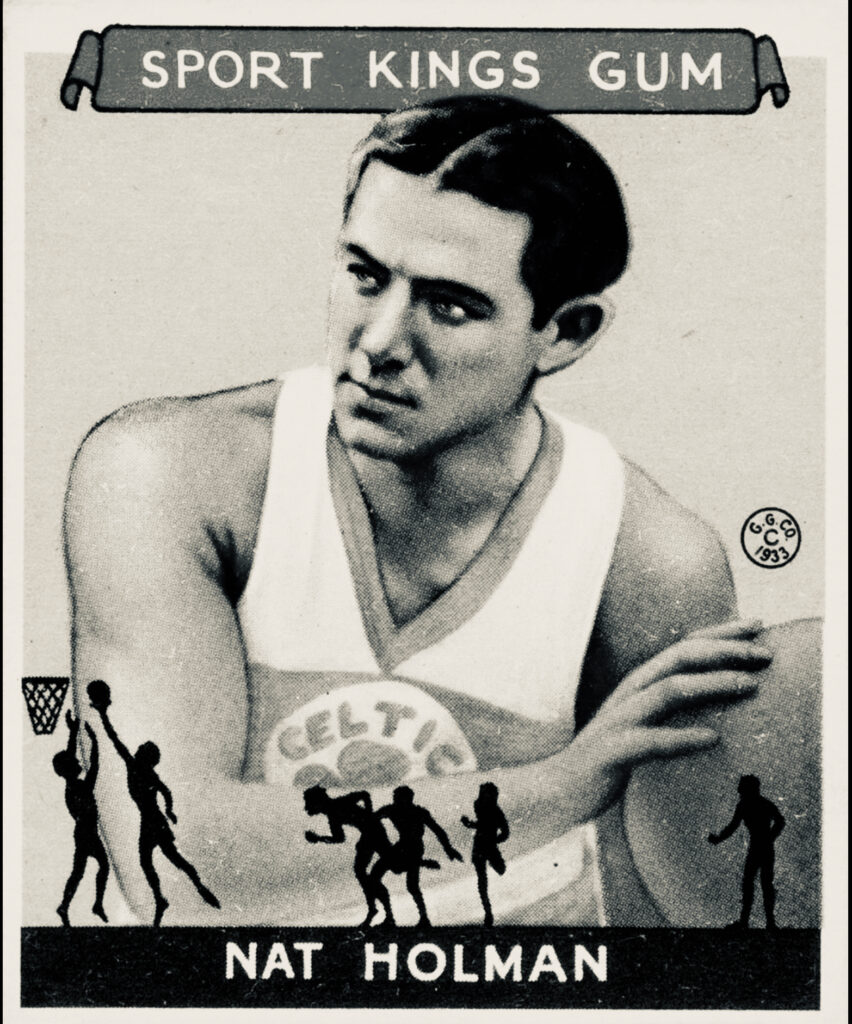 Matthew’s account is a riveting examination of the heartbreaking downfall of this historic team, placing it in the full context of a New York City rife with gambling-based corruption from top to bottom, for which a few young men paid the most awful price. 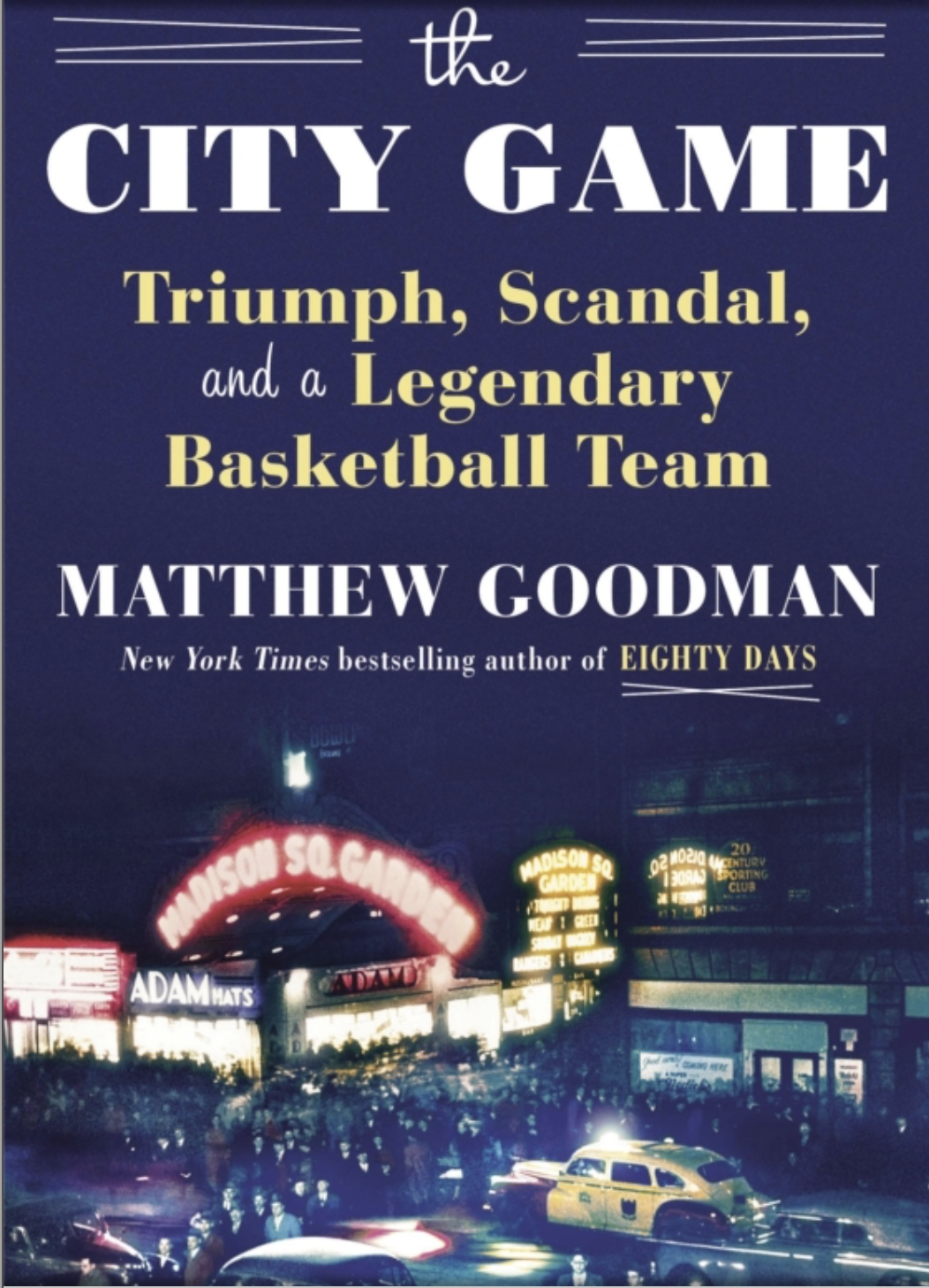 Excerpt from Chapter One, The City Game:

…Inside Wingate on this particular day, Wednesday, October 5, 1949, City College’s basketball team was conducting its first practice of the season—­an event scarcely noticed by the rest of the campus. Cars honked on rain-­slicked Convent Avenue, the thoroughfare that bisected the campus; the ginkgo trees along the avenue were tinged now with gold, their leaves like delicately tinted Japanese fans, providing a burst of color in a landscape otherwise mostly bare. The young men hurrying through the quadrangle wore cardigan sweaters and button-­down shirts and pressed slacks; some of the older ones, mostly World War II veterans in school on the GI Bill, preferred jackets and ties. The women wore low-­heeled pumps, and sweater sets with pleated skirts, bought at discount stores like Loehmann’s or Alexander’s in the Bronx or, downtown, Best & Company or S. Klein. Some of the more scholarly-­looking of the men wore horn-­rimmed glasses in black or tortoiseshell, the women cat’s-­eye glasses in black or white or silver. Those who weren’t on their way somewhere stood on the sidewalk in front of the Main Building, or in clusters by the statue of General Alexander Webb, hero of the Battle of Gettysburg and the college’s second president. They tossed raincoats over their arms, looking up doubtfully at the unsettled sky; many of them smoked cigarettes and talked.

A reporter from The Saturday Evening Post, observing City College students a couple of years earlier, had written that a visitor to the campus “will hear them talking like social workers determined to correct all the injustices of a harsh world by next Tuesday.” But that was just an easy quip meant for a middle-­American readership; far more likely, a visitor on this afternoon would have heard them talking about parties or dates from the previous weekend, or about plans for the upcoming one. Several of the Brooklyn movie theaters were showing the Cary Grant comedy I Was a Male War Bride; afterward, if things went well, there might be a burger and a malted at Garfield’s cafeteria or a slice of cheesecake at Junior’s. Up in the Bronx, the Ritz was showing My Favorite Brunette, another good date film, while guys who were on their own could catch Jimmy Cagney in White Heat at the Fordham. Some of the students likely talked about the latest news of the mayoral race (William O’Dwyer, the Democrat, seemed to be cruising to reelection), or, if their families owned a television set, the Milton Berle show from the night before, or perhaps their classes or one of the lectures upcoming that week. Professor Henry Leffert’s comparative literature class was always popular; later that month there would be a lecture titled “Novels of the Forties” by a promising young writer named Gore Vidal. (Professor Leffert was himself a notable figure on the campus. He wore a beret, collected modern art, and frequented the opera and the ballet, and though he was a fierce advocate of higher culture he also admitted to reading the novels of Mickey Spillane. When a student once asked him why, he replied, “Well, it’s good to see how the other half lives. After all, there are so many of you.”)

Surely much of the talk, too, was about the first game of the World Series, played in Yankee Stadium earlier that afternoon between the Yankees and the Dodgers. The game had been a tense, tautly contested pitchers’ duel—­scoreless until the bottom of the ninth—­and for those two and a half hours the city had come almost to a halt. Commuters on their way to Grand Central or Penn Station missed their trains to duck into a local tavern to drink a beer and watch the game; in the garment district, racks of dresses and furs clogged sidewalks, left there by shipping clerks clustered around radios in the doorways of office buildings. For days, most of the papers had been running previews of the Series not on the sports pages but the front page; the headline of that morning’s Daily Mirror had read yankees 3 to 2 to win opener. It seemed to no one especially remarkable that one of the city’s major newspapers would devote its front page to a presentation of the latest gambling odds.

You can order Matthew’s books via Barnes & Noble Here 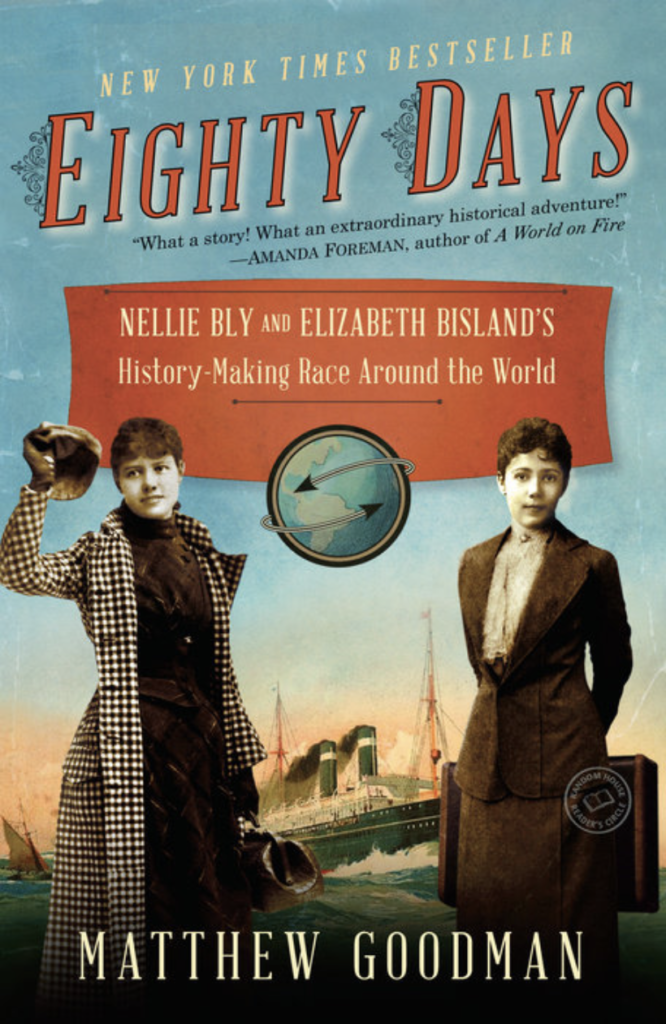 “On November 14, 1889, Nellie Bly, the crusading young female reporter for Joseph Pulitzer’s World newspaper, left New York City by steamship on a quest to break the record for the fastest trip around the world. Also departing from New York that day—and heading in the opposite direction by train—was a young journalist from The Cosmopolitan magazine, Elizabeth Bisland. Each woman was determined to outdo Jules Verne’s fictional hero Phileas Fogg and circle the globe in less than eighty days. The dramatic race that ensued would span twenty-eight thousand miles, captivate the nation, and change both competitors’ lives forever.” 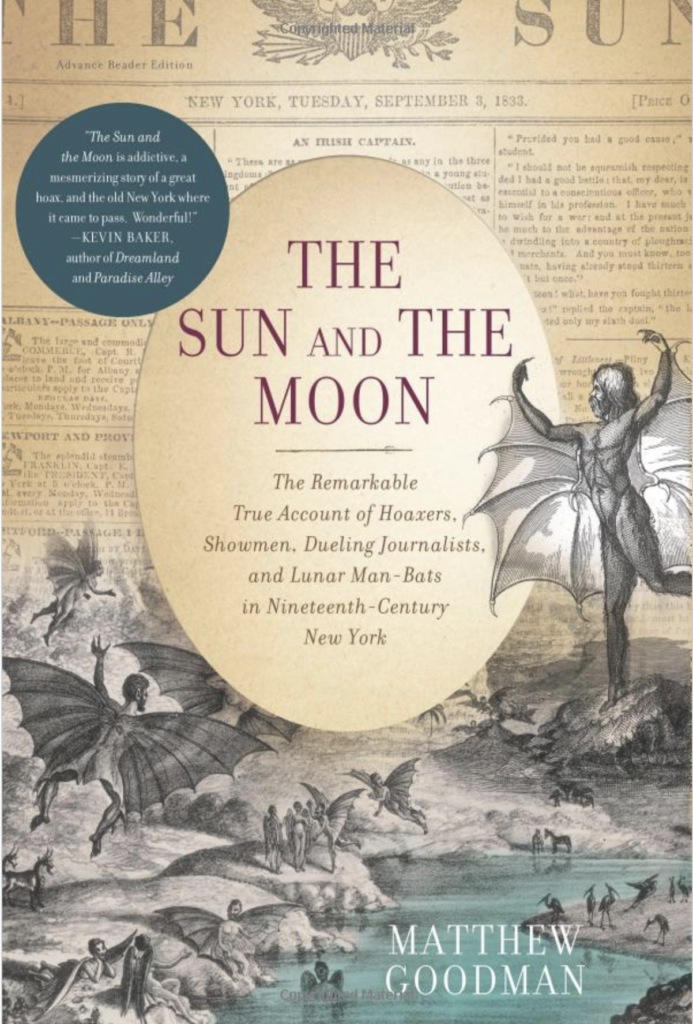 The Sun and The Moon: The Remarkable True Account of Hoaxers, Showmen, Dueling Journalists, and Lunar Man-Bats in 19th-Century New York

“The delightful, entertaining, and surprisingly true story of how in the summer of 1835 a series of articles in the Sun, the first of the city’s ‘penny papers,’ convinced the citizens of New York that the moon was inhabited.”